After a meeting in Jaipur, we’d planned a 3 night trip to the well-known Ranthambore Tiger Reserve in Rajasthan.  We set off from the Fairmont Hotel Jaipur after lunch planning for a 4 hour drive to the village of Sawai Madhopur which is where all of tiger viewing lodges are located, about 15min drive from the main entrance to Ranthambore. We stayed at the Ranthambore Bagh, a perfectly decent lodge with hot running water, staying in tents.  There was wifi in the main building and good food. 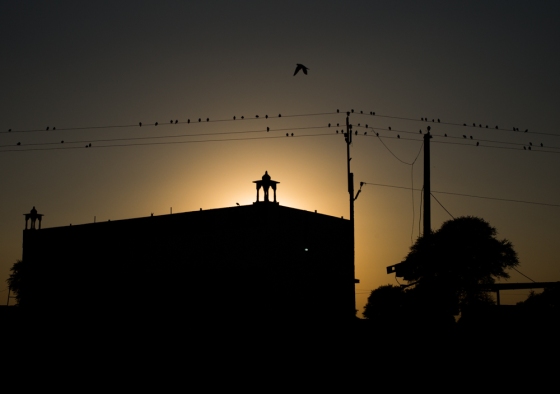 sun setting on the way to Ranthambore

There are two safaris every day, starting at 630am and 2pm and returning at 1030am and 530pm. The morning safari is very cold as you are in open top jeeps called gypsies so pack some fleeces and grab a blanket. We were there for 3 nights and 5 safaris.  Each gypsy can carry 6 pax fully loaded but it’s much more comfortable if a max of 4 share it so there’s room for all the camera gear etc. There’s a guide and driver too (Tipping guide:  300 rupees per drive each, more if they find you a tiger!)

our open topped jeep outside zone 4

Do not expect a tiger safari to be like a typical African safari, where the lions are easily seen and even leopards and cheetah not that difficult. Sighting a tiger on a tiger safari is much more chancy and you could well spend a few days there and not see a tiger…eg our group of 9 pax shared 3 jeeps and totalled a number of 15 safaris; a couple of tigers were seen on the first morning by one jeep, and no more were seen till the very last drive of the last morning, when the rest of us finally got to see a tiger in the wild.  Here it is appropriate to say that the system of allocating zones to each vehicle leaves much to be desired; there are 5 zones open for safari and clearly some are better than others due to the presence of cubs or kills etc.  For the 4 days we were here, our jeep was allocated zones 3, 3, 4 and 4 for the first 4 drives and all the sightings of tigers were in zones 2 and 5. A visitor would reasonable expect that if he is there for 5 drives, then he should be given one drive in each zone rather than be ‘allocated’ any random zone which in theory could mean that you go to the same zone 5 safaris in a row! It was only after we complained that we were allocated zones with no sightings at all that we were squeezed into one of the allocations to zone 2 where we at last got our tiger sighting.  The Ranthambore TR authorities seriously need to look into their way of allocating zones. They could also be more flexible in allowing large groups like ours to move people around the different vehicles instead of being totally rigid and set according to the initial allocation.  Thirdly, they should learn from African safaris and use some form of walkie talkie for guides to communicate with other guides should there be a sighting.

So, having got the shortcomings of the park’s authorities off my chest, what were the safaris like? Firstly, they are long and cold and you need lots of patience to sight a tiger. It helps if you are a birder and like other forms of wildlife.  The bird varieties were quite wide and there were deer of various types, mongooses and jackals too. Our first 4 safaris drew blanks as far as tigers were concerned..but there were plenty of pug marks and birds and deer…. 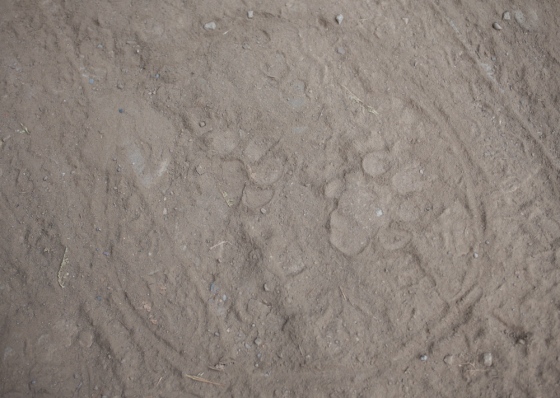 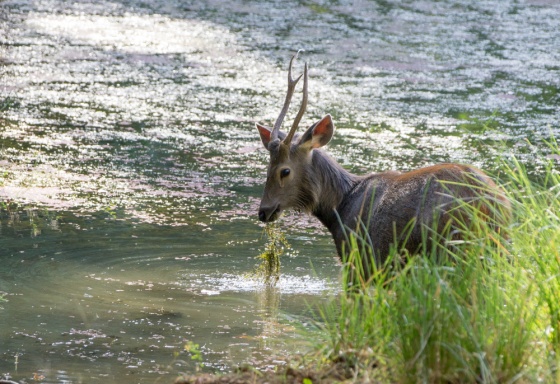 close up with the rufous treepie

The bird life was probably not as goos as Bharatpur bird sanctuary but interesting nevertheless.  The most common bird is the rufous treepie which was literally everywhere and some used to visitors that they often flew down onto our jeep allowing really close up shots of them….so whilst we were waiting for the tigers to appear, the treepies amused us greatly! 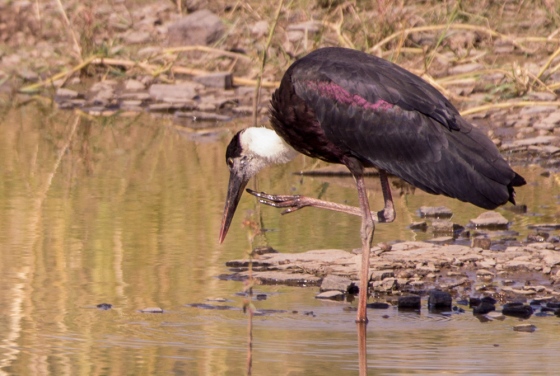 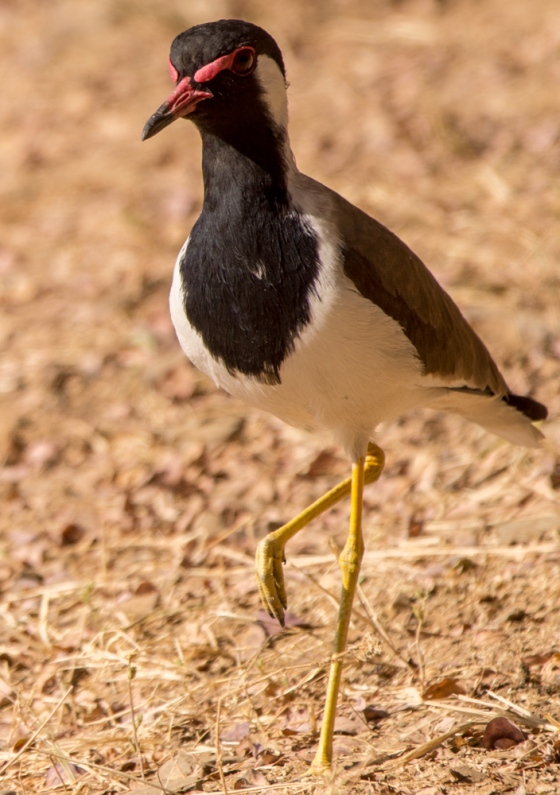 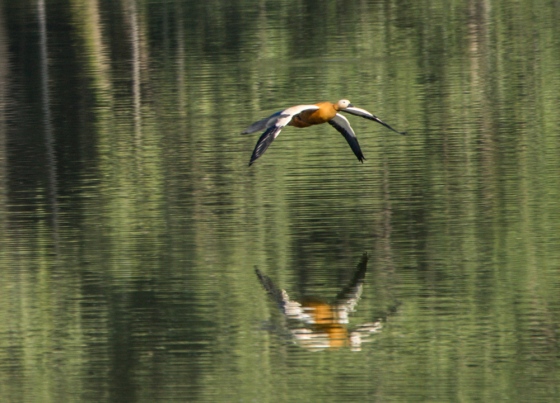 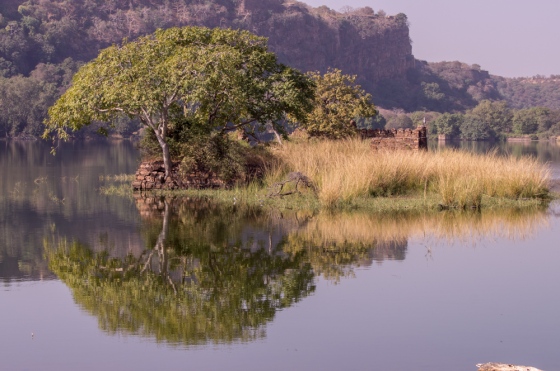 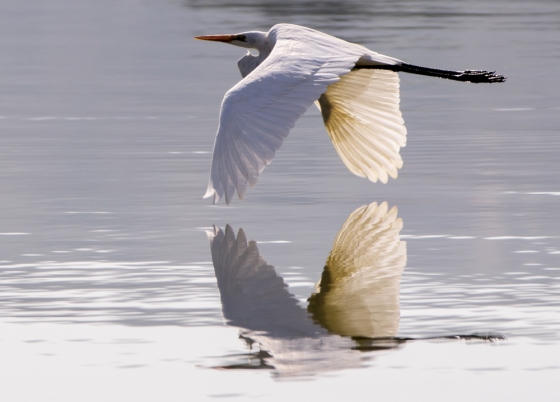 and of course the crocs were everywhre

The last drive on our last morning in zone 2 was almost over when the tigress inhabiting this zone was finally seen…albeit from afar.  She was resting about 120m away from us around a clump of rocks and grass and we were able to view her for about 15 min before she ambled away.  Park rangers are around to stop vehicles getting any closer to the animal.  Whilst it was a view from afar, it was still a stunning experience and we were mightily relieved that we could leave Ranthambore with a tiger sighting.  Some people were lucky…they got zone 2 and 5 for each drive and saw tigers each drive; others not so and left without a sighting…luck comes into it a lot.

just a glimpse of the tigress’ head from afar 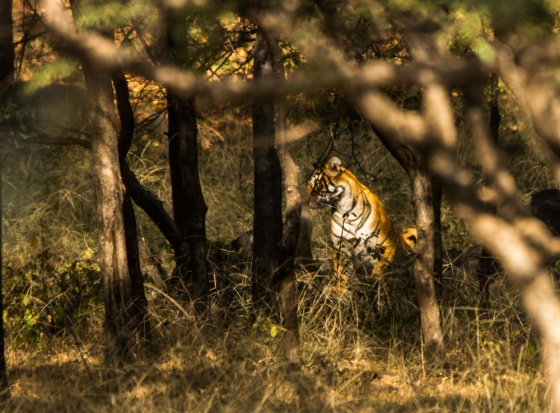 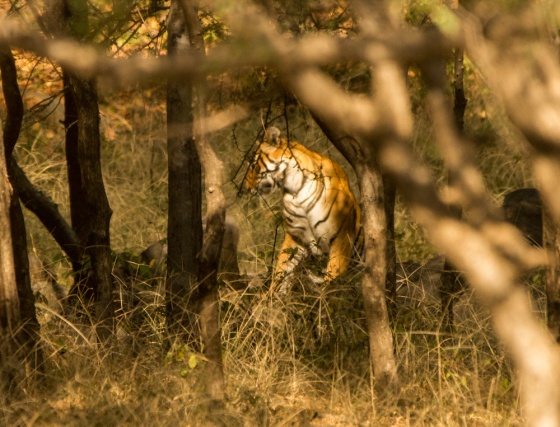 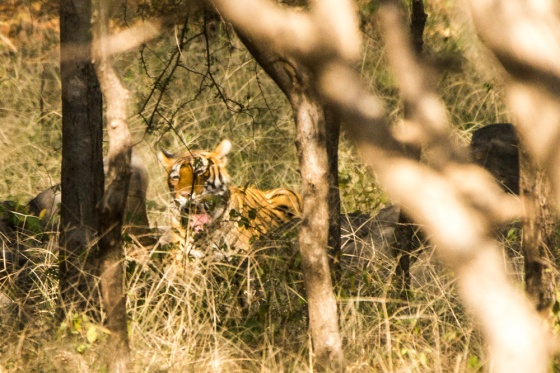 and she finally turned and walked off

cage used to handle the tigers when needed

It was but a 3 hour drive to Jaipur Airport…..

One thought on “Ranthambore Tiger Reserve”