Volcanos, lava flows and a few birds in Hawai’i

The Big Island or Hawai’i is known for having the longest actively erupting volcano in the world so we planned a visit there prior to a meeting in Maui. We flew into Hilo and picked up a car to drive to the little village of Volcano, on the doorstep of Volcano National Park where all the action is…we stayed at the Hale ‘Ohu bed and breakfast …a most charming B&B run by a lovely pair of sisters .   The garden of this place is gorgeous and you can take a short walk around….it’s also only 5 min from Volcano National Park’s entrance.  (It makes a lot of sense staying in Volcano rather than driving the 20 odd miles from Hilo to Volcano….you see much more volcanic action this way). 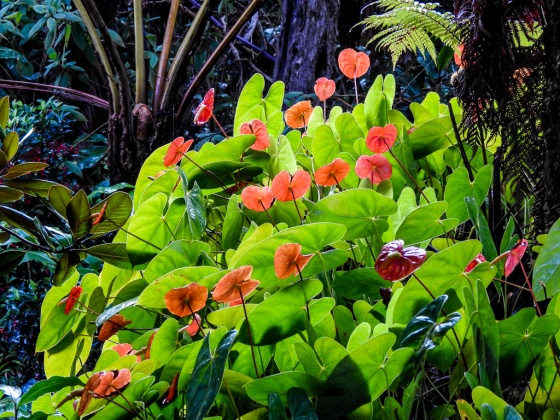 anthuriums in the garden

We set off for an evening drive to Volcano National Park,  starting at the Visitor Centre, Volcano House and then the Observatory.  There’s a very comprehensive display at the visitor centre and then we drove over to Volcano House Hotel and Restaurant, the only such place that overlooks the active volcano… 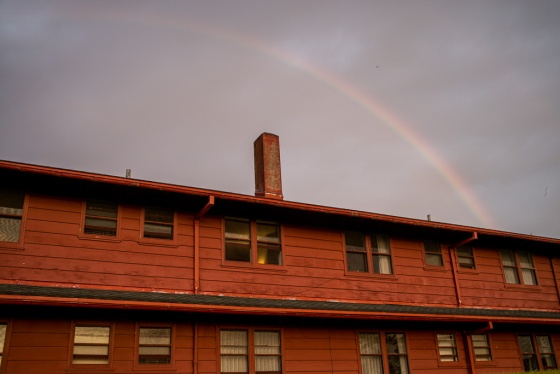 Interestingly, Kalij pheasants were roaming freely near the visitor centre…. 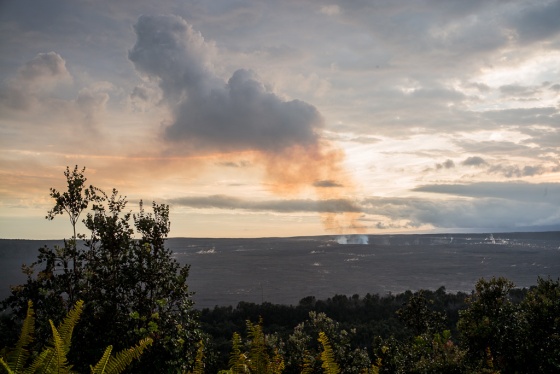 View of the active volcanic fumes spewing from Kilauea, one of the two active volcanos on the Big Island. Not very impressive by day…

steam rising from the ground 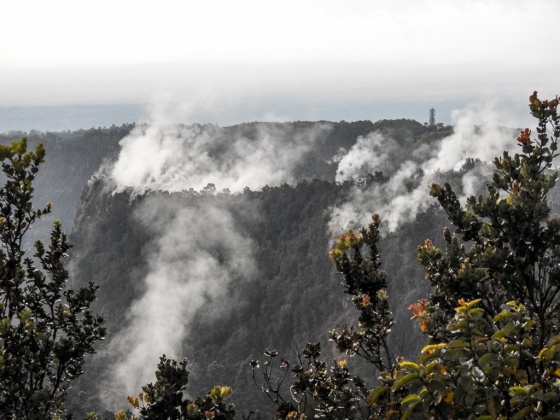 and as the sun set, the glow from Kilauea became more and more attractive 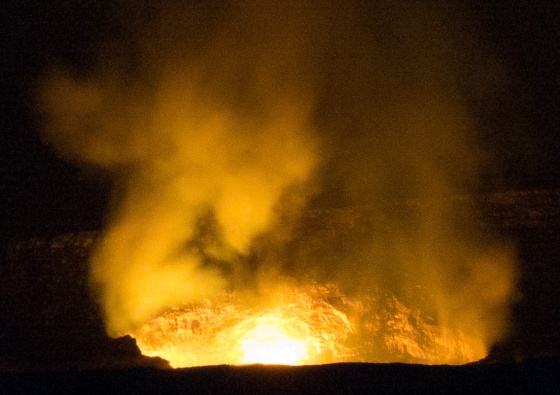 up close, we could see the little microexplosions with sparks flying

The next morning we took a drive down the Circle of Craters road down to the seafront….it was pleasant enough but I wouldn’t say it was a must do…

The Holei Sea Arch after an 18 mile drive 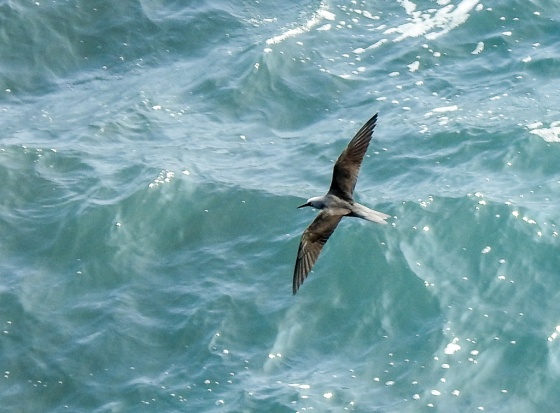 So the views we had the night before were of Kilauea from a mile or two away at the Volcano House and Jaggar Museum area and the only other ways of seeing active lava flow was to do a helicopter tour, boat (but there was no ocean entry at this time) , hike the very long hike all the way from the bottom of the Chain of Craters road, from Kalapana or do a part bike part hike outing…either chancing it ourselves or hiring a guide.  After deciding that we really wanted to get up close to the lava flow itself, we settled on doing a bike/hike with a guide from Lavaland Hawaii for about $120 a head…expensive but well worth every penny.  Timing is important and as the lava flow glow is much better seen at night, we correctly chose the 430pm outing from Kalapana.  It’s a fair way from Volcano, about an hour and once we parked the car, we had a look around for our contact…

There were some really friendly saffron finches around…

And some zebra doves huddling in the cool evening air

Our lavaland hawaii tour van appeared on time with the guide (I think his name was Hank)and there was only another couple joining the tour which was great…. the van carried us about a km in where we picked up our mountain bikes, kitted up and rode further in another km or so.  These are short distances but don’t forget we still had another 4-5km to trek over the old lava fields before we could get to the areas of active lava flows…and so parking and locking the bikes, we started our trek whilst it was still light, just after 5pm….

bits of the lava rock were glistening

the glow heightened with the darkening sky 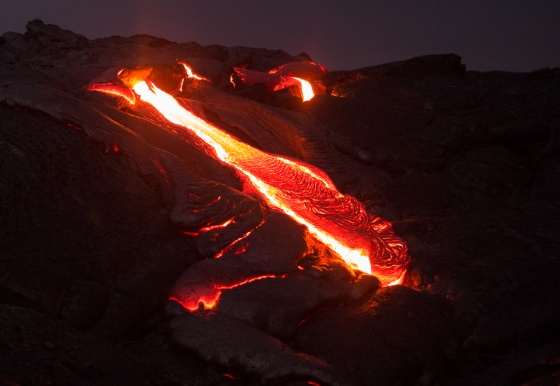 a large lava river then appeared

Having got up so close to the amazing lava flows that we could feel ourselves being slowly roasted, we headed back across the by now pitch black lava fields….we were truly glad that we had Hank to guide us back as there is no way we would have found our way back ourselves.  The 1.5 hour hike back was over soon enough….this was certainly the most interesting thing we did on this trip to the Hawaiian island…highly recommended.

Our last morning we birded a little in the garden…

A beautiful Apapane…a type of honeycreeper. They were everywhere but very hard to photograph as they were high up and very active. 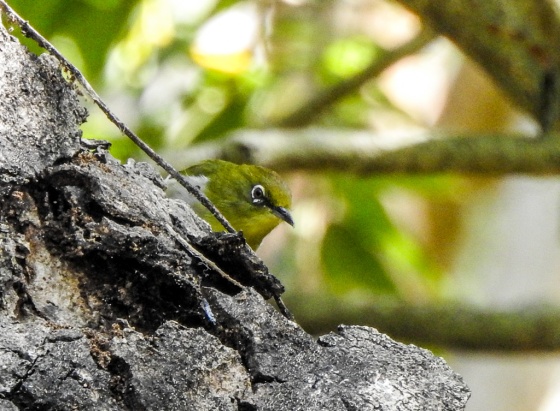 Our last morning after checking out, we decided to head to the Hawaii Tropical Botanical Gardens which is not far from Hilo airport to kill a couple of hours after lunch before departing… I love visiting botanic gardens the world over, large ones, small ones, they all have their own charm. This particular one was not big but just perfect for an hour or two’s stroll in a scenic coastal location.  As we have an interest in Anthuriums, the Anthurium corner was of special interest to us… 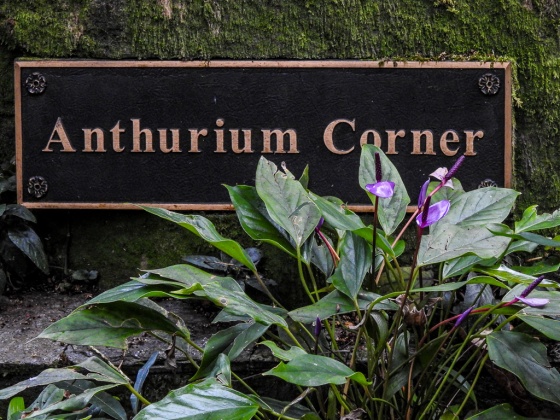 The anthurium corner had more anthurium species than I’d ever seen before….the purple ones were just spectacular!

Close up of purple one… 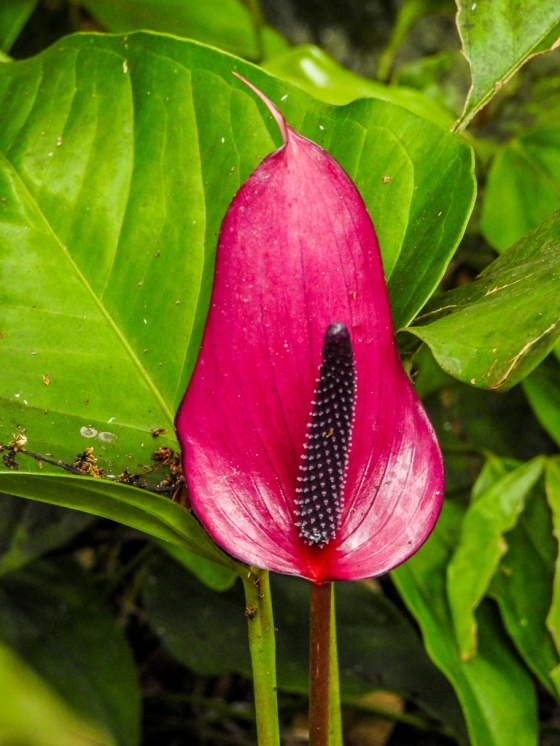 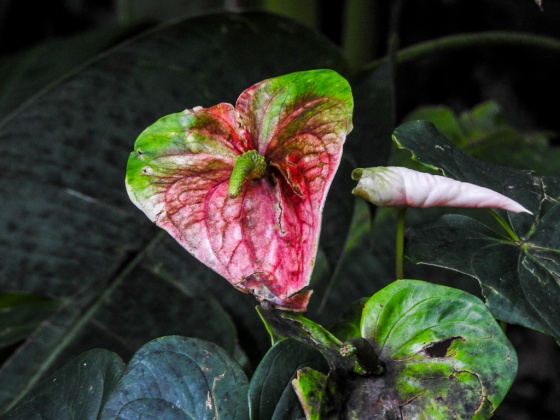 of course Hawaii is famous for pinesapples..

oh..an there was this almost black anthurium…

So we were in the Big Island just a couple of days, but it was easily the most interesting stop in our Hawaiian journey which also took in Maui and Oahu.  Getting close to the lava flows was an undoubted highlight…not to be missed!