In Siem Reap for the Chinese new year to shoot the famous ruins of Angkor Wat but also to incorporate a bit of birding this time….the weather was cool….we engaged a tour for the whole day just to do the temples….the sunrise shoot is the thing always recommended but does involve a 430am start time to get in position at Angkor Wat.

When you get there, it’s pitch black with only the stars and moon for company…the rest of the tourists all start arriving 530am on and it becomes a huge crowd.  The dawn creeps up surreptitiously and the night sky gradually lightens into hues of purple and red …interestingly, the photographs look much better than the actual scene…. 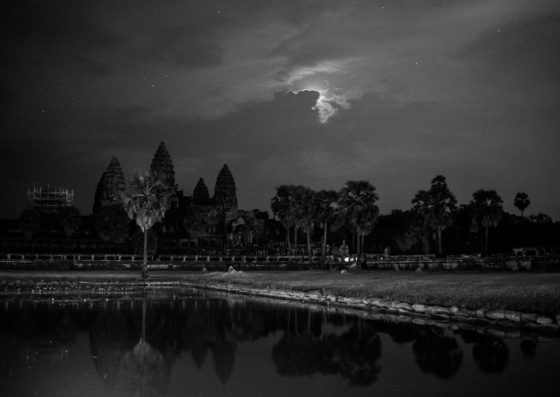 before the crowds arrive….only the stars and hidden moon over angkor

the dawn colours behind angkor wat 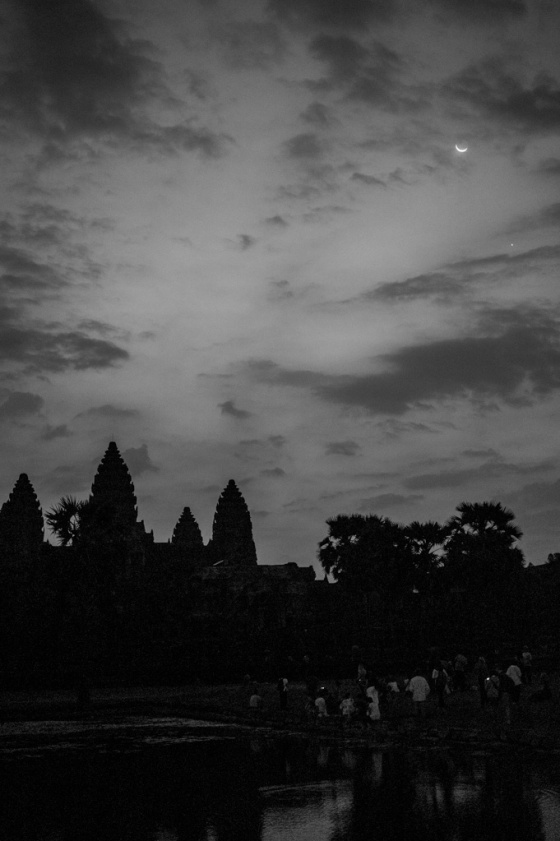 and the crescent moon shines as people gather

as the sun rose, angkor wat details then become evident….and we explored all three levels of the building itself.. 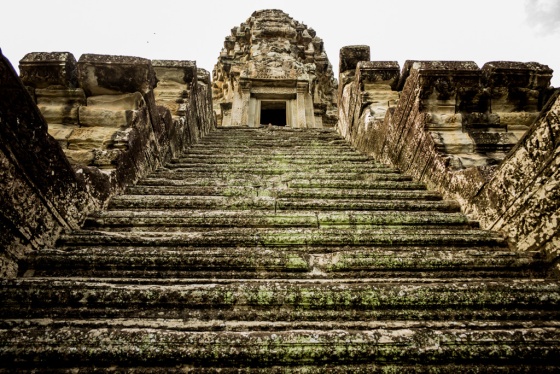 these are the very steep steps leading up to the third level and where one used to be able to climb up, they are now cordoned off and access is by way of a rebuilt wooden staircase over steps like these..there’s a 30min queue to get up…. 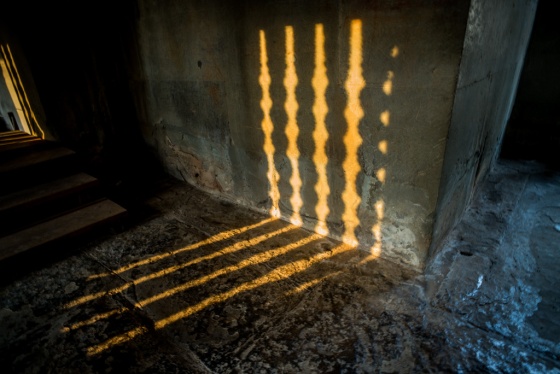 detail from the 3rd level of ankor wat 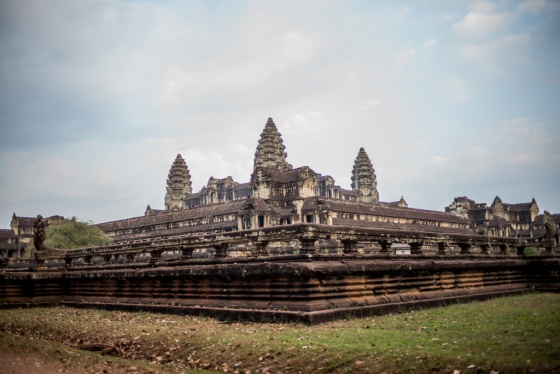 The Bayon, is of course the famous temple occupying Angkor Thom, with 53 towers each with benevolent Buddhas carved on them….

By this time it was 10am and time for breakfast and a break before resuming the temple tour at 3pm…on the route were Ta Prom, Ta Som and watching the sunset… 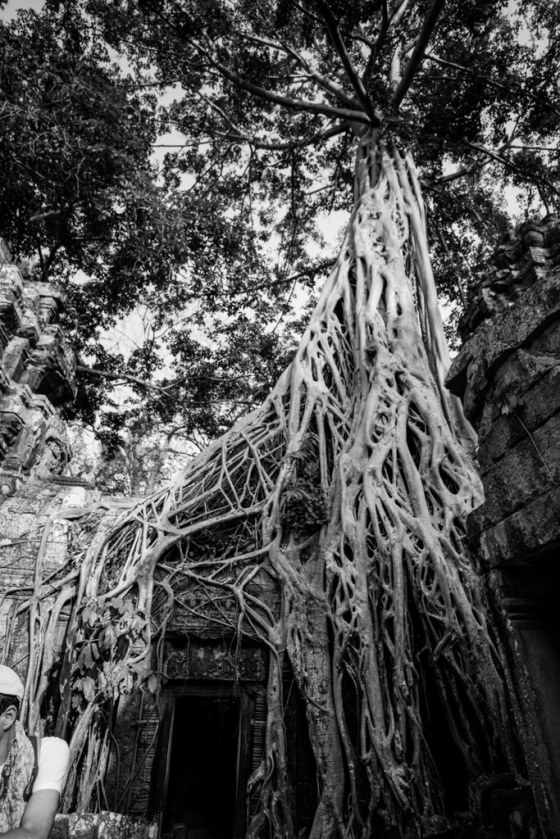 Ta Prom is of course the temple where giant tree and their roots have overgrown the temple leading to these beautiful scenes, as used in Indian Jones movies…. 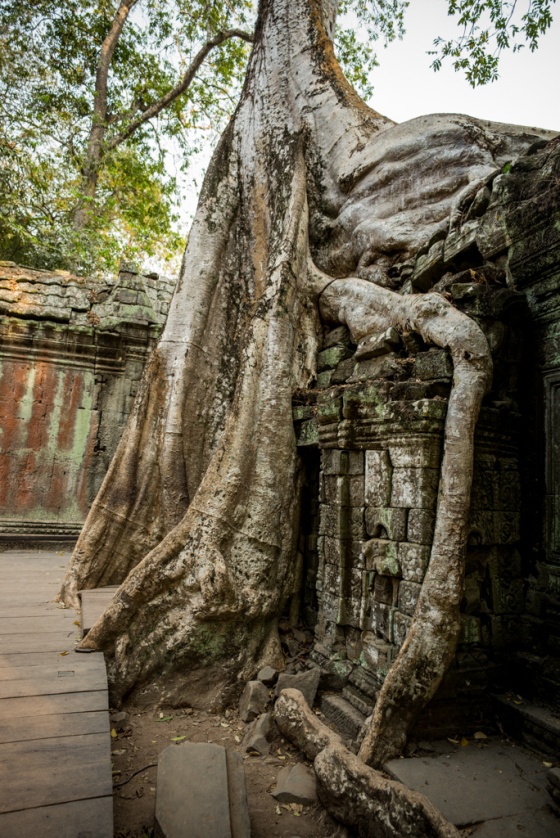 Ta Prom was probably the most interesting to photograph and I was a bit upset that I did not bring my birding camera and binos there …the place was teeming with bird life up in the trees!

The last major temple of the day was Ta Som, which mainly features this small structure with a tree growing right on top of it…

back view of tree on house in Ta som

Feeling totally ‘templed out’ by now…our other days were spent visiting other things…. 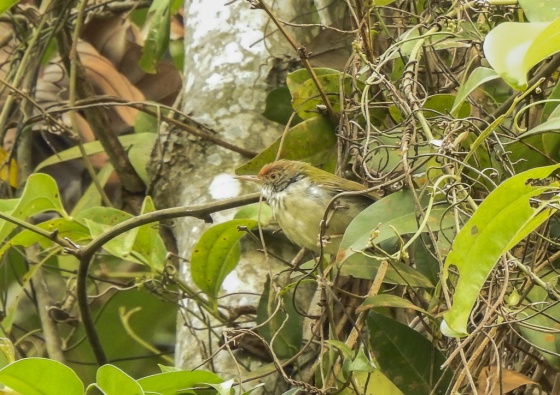 and then just as I thought it was going to be a pretty dry morning, this beautiful bird appeared…

brilliantly yellow body and a sooty black head for contrast….Nishant identified this as the black headed bulbul ..just beautiful

And on the ground the lotus flowers were in full bloom… 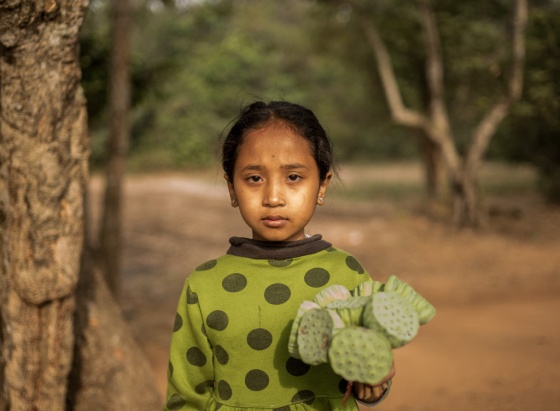 when the lotus flower wilts, it leaves behind a pod of little lotus seeds which can be seen in this charming little girl’s hand..she sold me a bunch for $1 and they were most tasty….remember to take out the green centre from the seed before you eat it though…

We also paid a visit to the War Museum on the outskirts of the town and it was most interesting…actually I think if you come here, you don’t need to go to the Landmine museum which is much furter out of town…

The grounds of the war museum were well covered with trees….and I again cursed that I had not brought my birding gear with me!

Siem Reap town of course is buzzing and the markets and cafes are quite fun to wander around when you are templed out….

Overall,  Angkor Wat is Angkor Wat and you have to see it and the other temples around, but if you are a birder like me, you could make your visit very much more fulfilling if you bring your birding gear along to Ta Prom and certainly the war museum….