Our birding expedition to Palawan started off on day 1 with a planned trip to the Puerta Princesa Subterranean River and National Park, (PPNP).  It entailed a 2 hour drive from our hotel in Puerta Princesa departing at 4am(!!) to get to Sabang  in time to take a 20min boat ride from Sabang to the river….. The morning however turned out to be wet and gloomy and the Palawan coastguard would not allow any boats out…  we had a choice to turn back and figure something else out or attempt an overland hike to the PPNP…our guide and the sign board said it was something like a 3.2km hike…and so being the intrepid travellers we were, we set off on the hike…

The dark clouds and moored boats at Sabang

All keen and raring to go on our hike to the Underground River…little did we know….

We had standard issue of Leica Silverline binoculars which we had all recently acquired in preparation for this trip…and there was a Leica Safari M and my Leica Q as well…we were supposed to be birding in the PPNP so we all carried our binos ..I also brought my Leica Q and Niko P900…..

I think this is an awesome combination for a birding trek….Binos, Q and P900…. 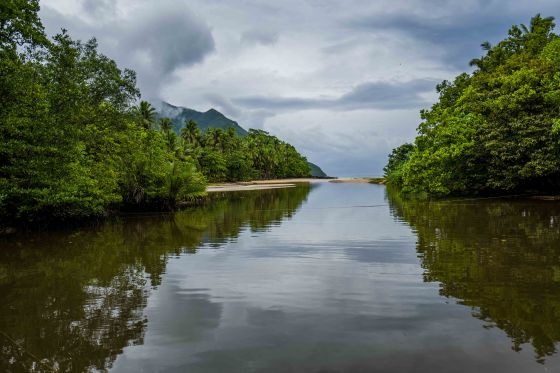 this was the scenic view at the start.  As it was only drizzling slightly at this point, I opted to only take my Q, P900 and binoculars with me and leave my backpack behind…bad decision….as we walked and walked, the rain got heavier and heavier…until I had to borrow a trashbag from Ces to house the two cameras 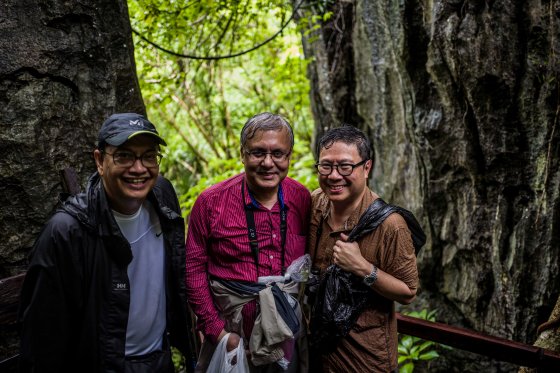 About 45min into the hike, we found a rest hut…which was welcome

At times, the greenery was very pretty..but we were too wet and muddied to see any birds…

2.5 hours after we set off we finally descended the last steep steps and emerged at the ranger station where the start of the underground river was…it was also where we were supposed to look for the endangered Palawan Peacock Pheasant…but we were too exhausted to look for it….so we headed off to the river with instructions to our guide to find us a boat by hook or by crook to get us back to Sabang….. 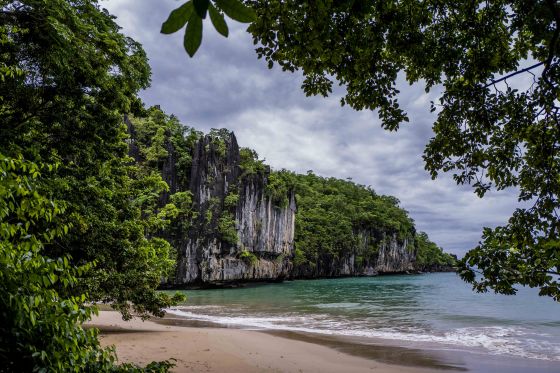 This is the beach where we would have arrived had we taken the boat….we set off on the other side of the headland seen here

the boats with the cavern entrance in the background….all of us fit into one boat…

With just light from our torches, the Leica Q came into its own, enabling all these shots in the dark cavern, on a moving boat ..I cannot imagine trying to focus a Leica M here! 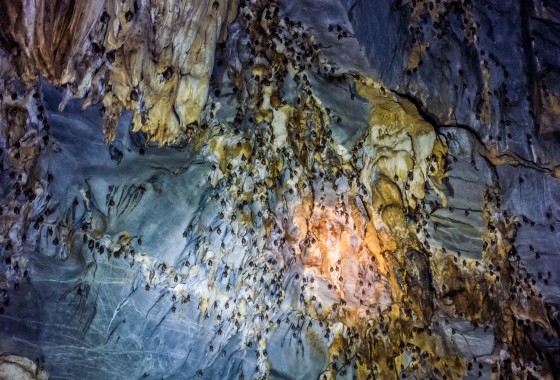 Bats on the wall….

Reflections of the stalagmites…

And at one point, there was water raining down on us from the roof….and I took this shot with the Q shooting into the rain…the Q didn’t miss a beat…

We finally emerged from the cavern into heavy rain again…..and our guide gave us the grim news that no boats could come out due to the weather…I asked in vain for a helicopter….. our faces collectively fell at the thought of that long hike again…only the terrain was even muddier now and we were quite tired already…not to mention split shoes, painful knees etc etc….

halfway rest stop on the way back….we’re still smiling although inside we were hurting…..we eventually made it back after another 2.5 hours 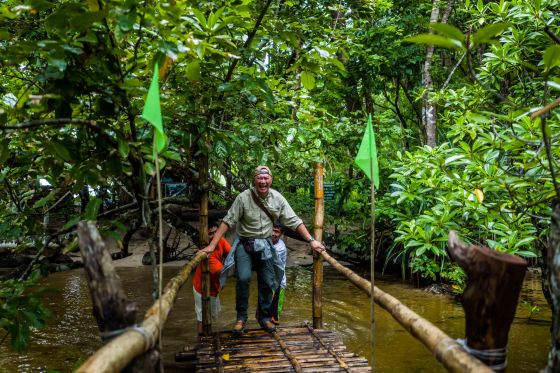 Ces lookind suitably embarrassed at being carried over the shallow river waters by our two porters…haha..the rest of us took off our shoes and waded over

The iPhone has an app which measures how far and high you walk….and it told us that we had hiked 13.5km and climbed the equivalent of 68 stories!!  So much for 3.2km each way…. and talk about misleading signs,

Walking back to our van, our guide spotted a lesser coucal…normally I would have jumped at the chance to shoot it but this time,,,,I just gave the camera to our guide who took this very nice shot with the P900…

We were absolutely exhausted and headed straight back to our hotel…..when I assessed the damage to my Q….Using the trashbag to carry my cameras protected them from the rain, but created problems as a few times I forgot that I wasn’t using a backpack and reached out to grab a branch or a railing forgetting that I was holding on to a bag of cameras….resulting in 3 drops of the camera bag (which split) onto the muddy trail… 😦

Fall number 1, mud on left side of body and strap… 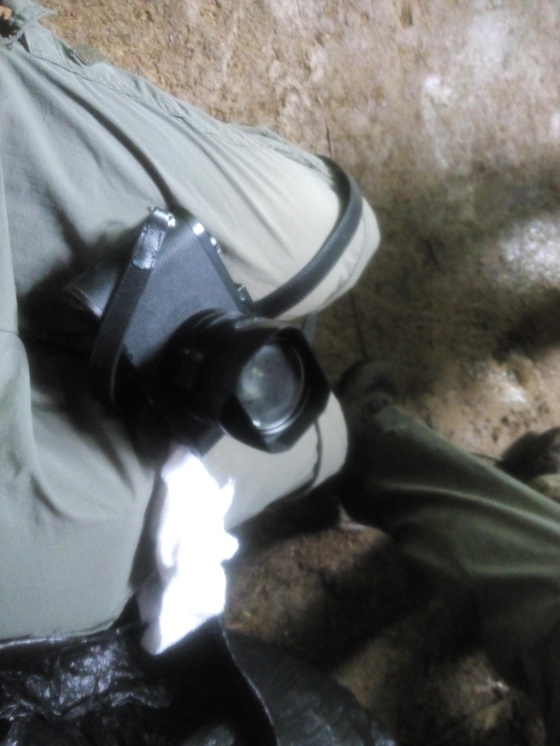 lens steamed up within the bag…

Fall number 2……mud on right side of camera….

Here comparing with Benj’s new Q…..I wonder if I can sell my battered and discoloured Q for a lot of money a la Lenny Kravitz?

Not having seen the endangered  Palawan Peacock Pheasant (PPP) on this expedition, we returned to Sabang a few days later to seek it out….this time the weather was just a little bit kinder although the sea still looked rough….and we were allowed to take the boat back to PPNP where the PPP was supposed to be found near the ranger station…

It was raining yet again and we waited in the ranger’s hut whilst our guide Totic went to seek out the pheasant…eventually he called us to him and there it was!   One of the most beautiful birds anywhere…the Palawan Peacock Pheasant, endemic to Palawan and threatened with extinction….

These pheasant pictures were taken with the Leica Q and its 28mm lens…..it was dark under the canopy and these pictures turned out way better than the smaller aperture P900 ..who says Leica cannot take bird pictures!

Coming back to Sabang on the boat, the swell was big!!

There is a rest stop halfway between Puerta Princesa and Sabang, and its well worth stopping at for the outstanding views… 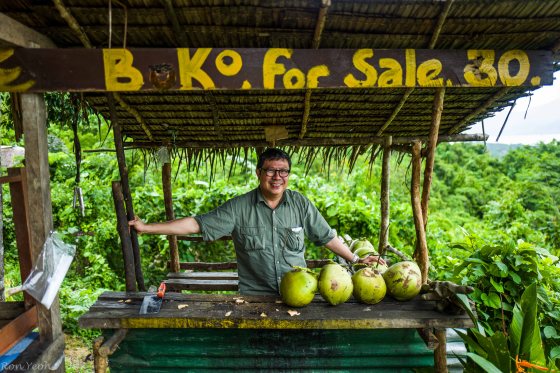 and the coconuts were sweet and refreshing

The Puerta Princesa underground river is worth a visit…but make sure the boats are going before you set off! The Palawan Peacock Pheasant is also worth seeking out….overall though, I was most impressed with how the Leica Q came through rain, sea, wind, mud, darkness and didn’t falter once….working perfectly despite my dropping it three times….

3 thoughts on “Leica Q in the field, and wind and rain and mud…”