As Qatar Airways matures into a leading airline, more and more of us will be making transit stops in Doha of several hours before our onward connections and this begs the question of whether one should just relax in the airport or premium travel terminal or try and explore a bit of the city. Having just flown 13 hours from NY to Doha and with a 6 hour transit I was faced with just this quandary. In the end, the temptation of trying to catch the Damien Hirst  ‘Relics’ exhibition, a major collection of this works, at the nearby Al Riwaq Museum was too hard to resist.

The things you need to be aware of before doing this are: 1. Ensure enough time: I think a 4 hour layover is enough to let you go for a drive, short walk and take some pictures.  2.  Check the location of what it is you want to see; the Souk Waqif? The Corniche? The Museum of Islamic Art? Dinner?

The good news is that the airport is only 5-15 minutes from most of the places mentioned above so you can easily take a drive along the Corniche and walk in the souk and have dinner in 2 hours.

So once you’ve decided that you’re adventurous enough to do this, you need to get off the aircraft pickup bus  at the Arrivals Terminal and not the Premium Travellers Terminal or transit terminal where you would go if you were transiting.  Most casual arrivals will need to buy a visa on arrival (100rials 0r about USD30) which is issued by the immigration officer at the usual immigration counter.  (yes, you need to pay this even for a 2 hour hop into Doha!)  Payment using a credit card is accepted as most of us would not have the Qatari rial.

Having gone through immigration, you need to get some local currency but there are no moneychangers in the airport..thankfully there is a bank on the way out that will change your USD to the local currency for taxi fares and meals etc.  Oh and by the way, don’t be tempted to leave your hand luggage in left luggage as the departure terminal on your return is a long way away……

As I only had 30minutes before the Damien Hirst exhibition closing time at 8pm, I quickly hopped into one of the long line of green regular taxis.  The driver was a very pleasant English speaking Indian gentleman (I think that many service staff in Qatar hail from India) who drove me to the Al Riwaq museum right next to the Museum of Islamic Art, both just 5 min away arriving at 730pm.  It cost about USD8. One concern I always have when visiting a new place and have need to make it back to the airport is whether taxis would be available at that time?  So I negotiatied with the driver to come back and pick me up at 8pm sharp.  It was just as well I did, as the museum complex is quite far in, and I would have had a fair long walk to get back to the main road to hail one.

A very pleasant surprise was that entry into this exhibition was totally free of charge!  Although I thought I had 30min to view the exhibits, the staff there in fact ushered all of us out at 745pm (I think to give them time to close up so they could leave at 8pm!)

Damien Hirst is one of the most expensive living artists in the world today so it was great to see whether it was hype or substance. The exhibits were quite decently curated with useful information.  Of course whether you believe the statements that Hirst makes regarding life and death as the basis for exhibiting dead animals as art is another thing. 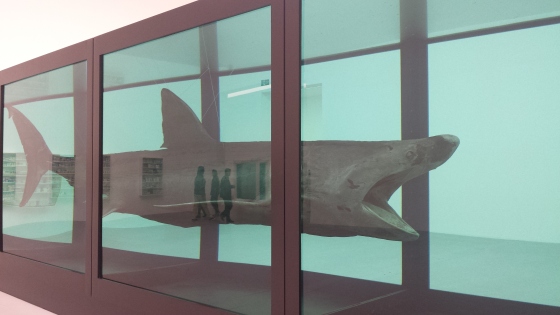 A larger basking shark with 3 tourists in the tummy.. I jest 🙂

On to the polka dots that also dotted the outside of the building; there were quite a few polka dot paintings or prints(?)

The most beautiful item was the diamond encrusted skull which we were not allowed to photograph…and the most unusual was ….

glass cabinet with surgical instruments..maybe I can get my old instruments out too and be an artist?

So all in all, I was glad I caught the Damien Hirst Relics exhibition in Doha which was a nice contrast to seeing the abstract works in the Met museum in New York earlier but I remain unconvinced as to the validity of dead animals and geometric polka dots as art.

My driver turned up promptly at 8 and we took a slow drive down the Corniche to the city centre across the bay, pointing out the Sheikh’s palace, the Souk and other new buildings. 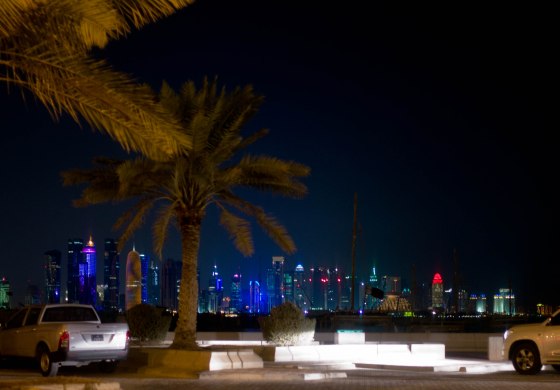 view across the Corniche across to the city centre 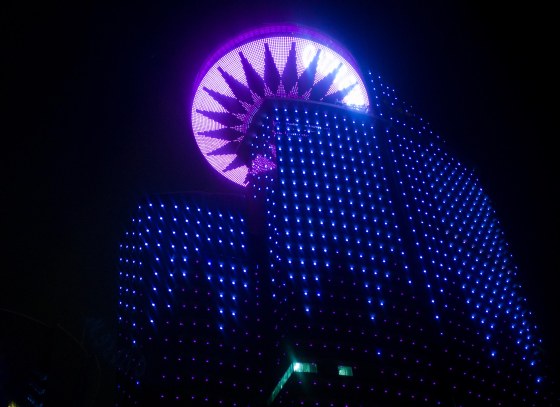 and the rather suggestive looking golden tower… 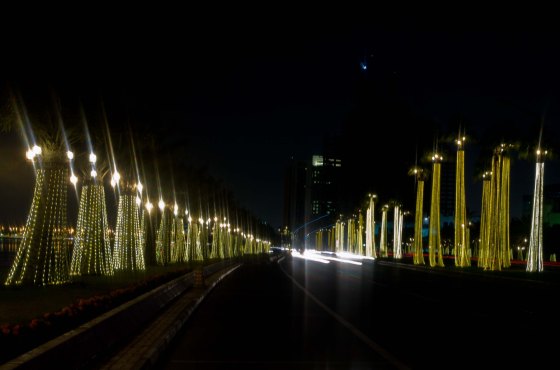 And that was that…actually I took only just over an hour to do all that and I was dropped back at the Departure terminal in very good time for my flight, without stress, having seen a major exhibition quickly and done a drive around the Doha. The driver only wanted another USD15 but I gave him USD30 for the peace of mind he gave.

2 thoughts on “Short layover in Doha”