My last visit to Bharatpur was last September when I did a whirlwind visit over a couple of hours, a couple of hours that barely whetted the appetite and left me wanting more. This time, I organised myself a little better and planned a whole day trip there with a birding pal and a guide. I got my hotel to prepare a packed breakfast for us as we set off at 6am from Agra and trust me, it’s much better going at this time as the small congested roads are empty and you make much better progress than later in the morning. Also, we arrived at Keoladeo (the proper name for Bharatpur bird sanctuary) at 730 just as activity started.

I had a few things on my wish list….Nishant had mentioned that the rare Siberian ruby throat and the Sarus cranes might be there and having recently been more interested in snakes, I also wanted to see the Indian rock python in the wild.

We met our guide Randhir Singh, who had his own bicycle and spotting scope and basically accompanied Nishant and me round in our rickshaw.   I felt a bit sorry for our rickshawman pedalling the two of us around..but we actually got off and walked a fair bit and the rickshaw was used more for storage or our cameras etc.. 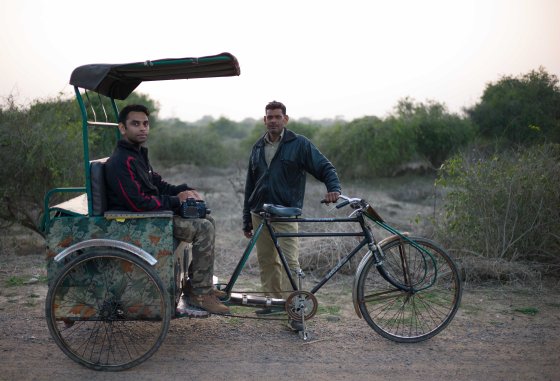 Off we went and I was equipped with my Lumix FZ200 with a 1.7x teleconverter  for my bird shots and my trusty Leica M9P for general shots. The Leica 10×42 trinovid was my binocular on this jaunt. A few standard birds first… 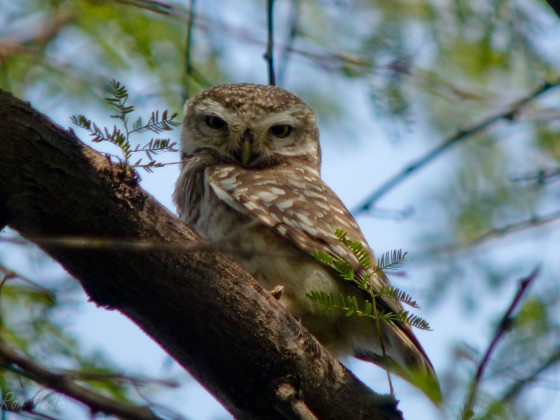 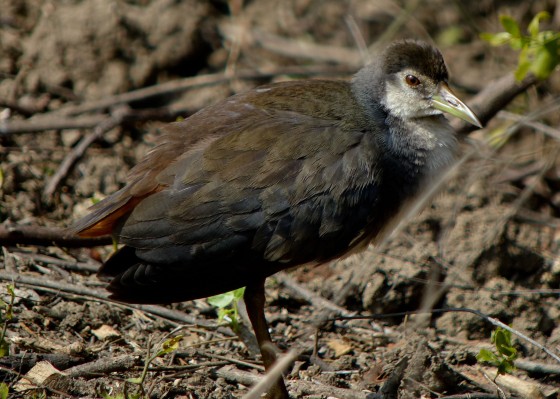 not sure what this is! 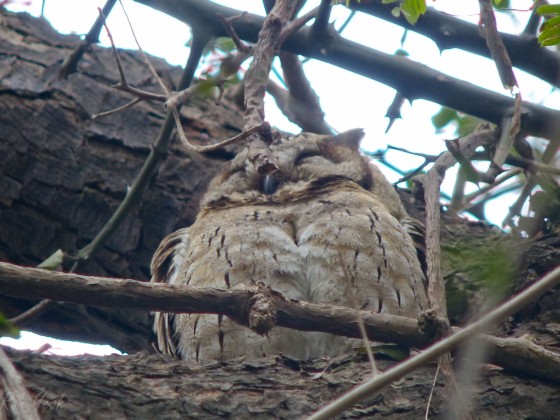 We saw a few common jungle babblers and indian rollers  as we started but we soon reached the junction where the park really starts and we alighted to stalk the Siberian ruby throat which was apparently in the bushes.  We waited and waited whilst the guides circled the area and tried to locate this exquisite visitor to Asia. The shy bird was finally located deep in the thicket and all we got were mere glimpses of a brown shadow hopping around on the ground and up the branches.  At this time a large group of extremely vocal and not terribly socially conscious birders  descended on the area which made the spotting even more difficult.  I thought I was doomed to only see the brownish back of the bird when it finally hopped up a branch which I could see and I managed to see and wonder at the brilliant ruby red throat that gave it its logical name( for once!) Sorry about the poor shot but that was the best I could do in the dim light of the thicket. So we had invested about an hour and a half in seeking out the red throat but seeing this lifer in the flesh was totally worth it! 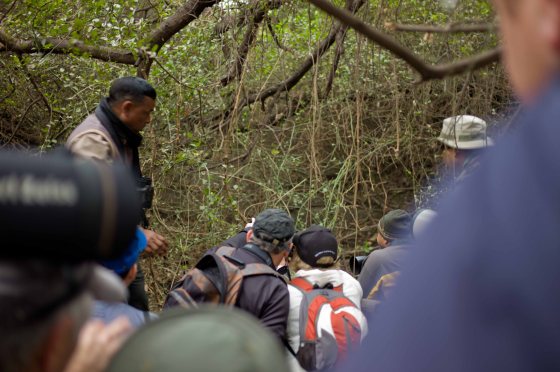 the crowd of birders seeking the siberian ruby throat

Moving on, we started seeing the water birds..cormorants, snake birds and ducks galore!! I’ve never seen so many migrant ducks as this before…there were Northern Shovelers, pintails, gadswalls, ferruginous pochards, little grebes, brahminy ducks, Garganys…fortunately our guide and Nishant educated me.  Moorhens, herons grey and pond, painted stork  and the like were also plentiful. 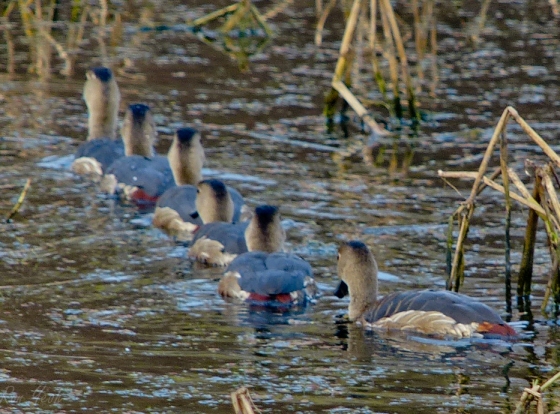 6 pretty duckies all in a row.. 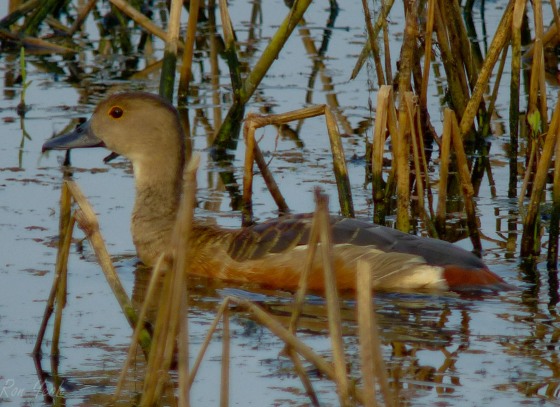 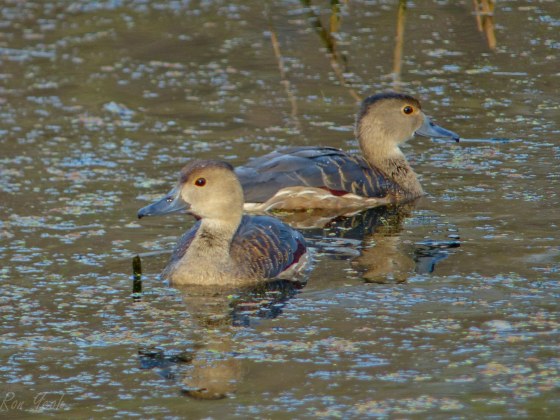 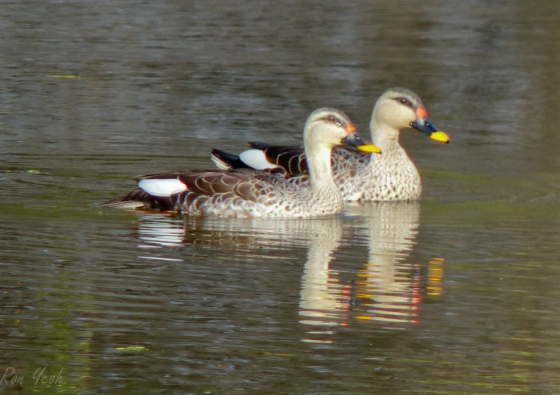 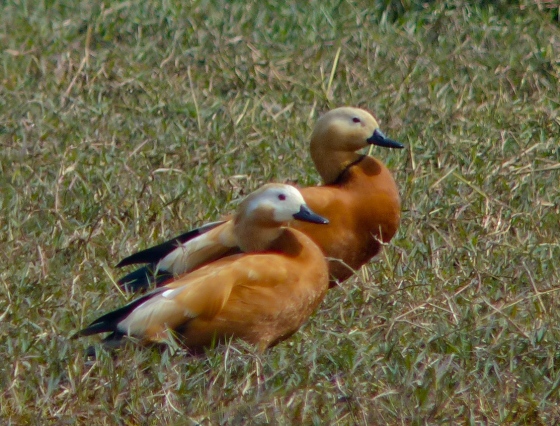 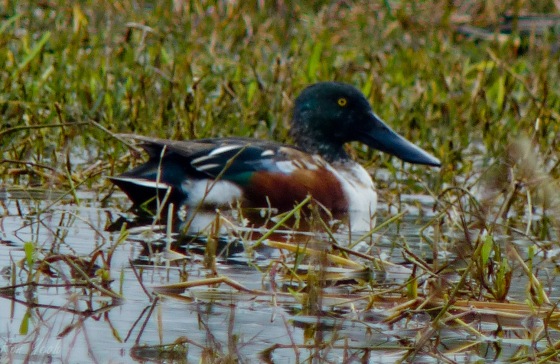 This was the sad record of the previous duck shoots, now banned, thankfully. 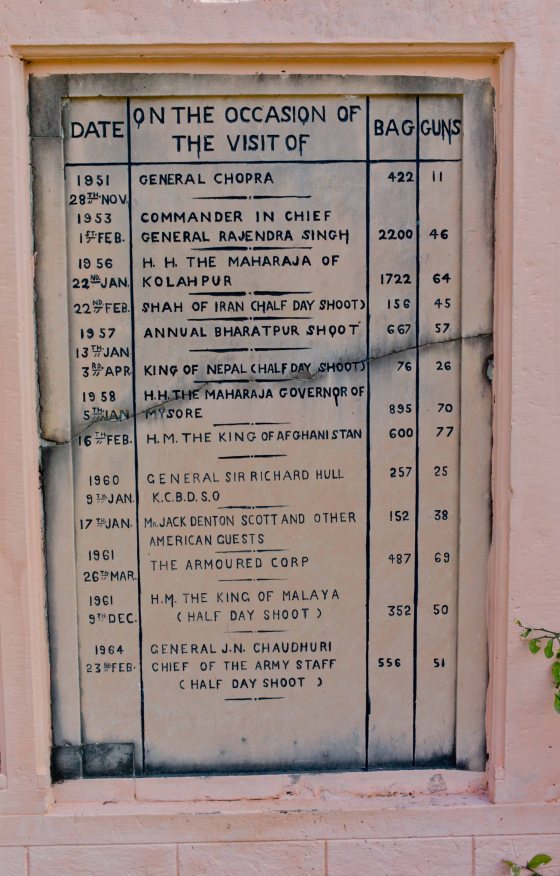 When I was here in September, there were lots of mating pairs in the nests…it was really cool to see the offspring squabbling in their nests this time round.

And then some activity as everyone rushed down the track as there were 4 endangered Sarus cranes flying in formation…difficult to shoot! We decided to try and track these magnificent cranes who mate for life with a single partner and took a walk on the right 90 degree track from the main road. It was about a 1 km walk before we got to a clearing and there they were….a magnificent pair of red headed Sarus Cranes, grazing peacefully in the scrub.  Oh and we also saw a yellow crowned kingfisher whilst we were in this area.  I also reacquainted myself with the Little Spotted owl and the scops owl which are always cute. 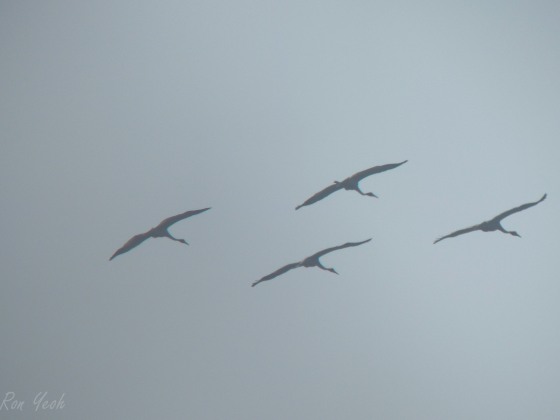 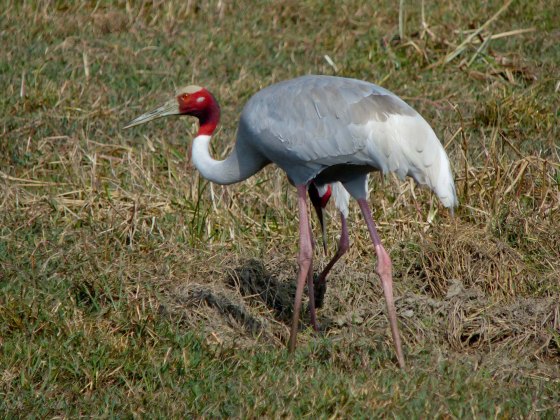 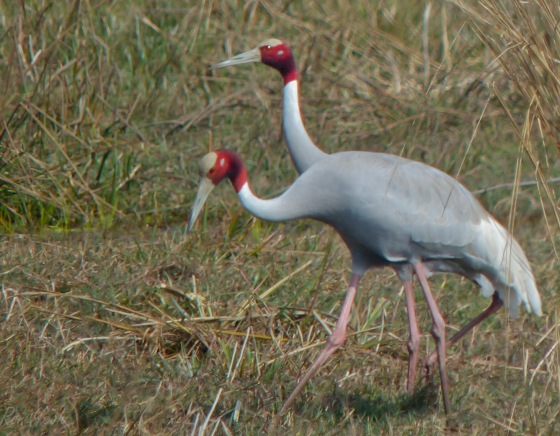 a pair of sarus cranes

My other birding pal had arrived by now and Manish immediately  spotted this grey heron with a catfish inits mouth and we were able to watch it down its catch most dexterously. 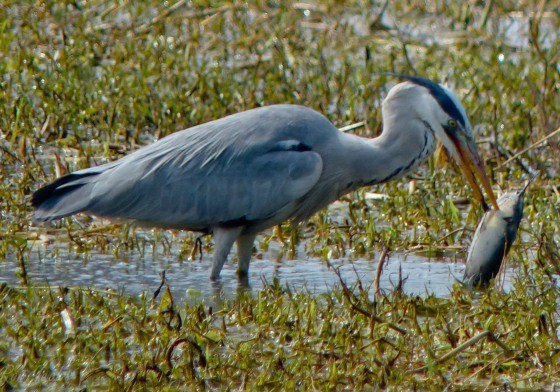 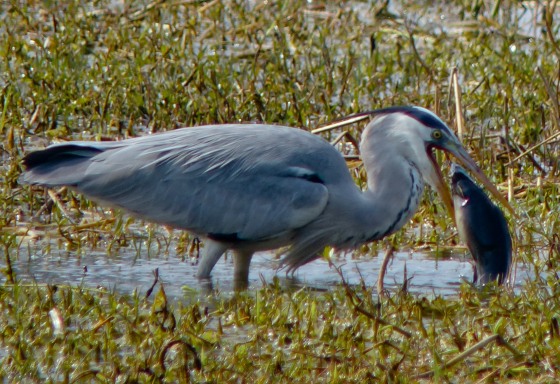 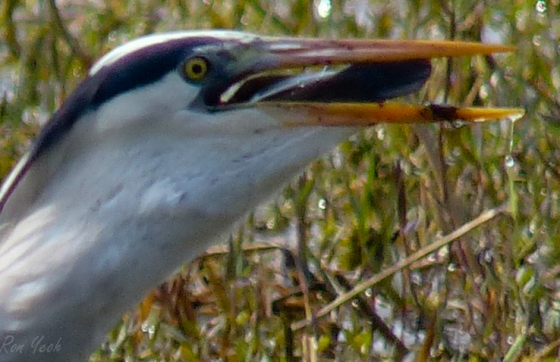 Then it was time for our python sojourn and our guide led us on one of the tracks 90 degrees to the left along a bund. It was a looong trek…about 2km and by this time it was afternoon and hot.  Along the way, we spotted this beautiful Shikra perched up high. 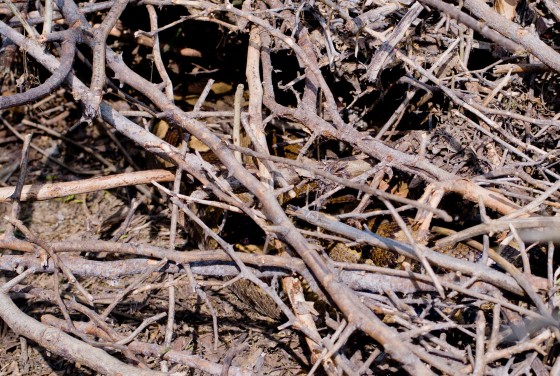 And finally our guide let us to this clump of branches, where initially there was a rustle and a flurry of movement before I saw the unmistakeable reticulated pattern of an Indian Rock Python hiding beneath the branches. Our guide then disturbed the branches and the python slithered away rapidly and I lamented that I hadn’t got a good shot.  Undeterred , the guide then led us further into the bush where we came across a mound under some trees  with a hole in the ground…as we approached, a huge python slithered into the hole but thankfully another one stayed above ground….I was reliably informed by the guide that there were FOUR pythons when we arrived but that on sensing our footsteps they rapidly disappeared…This last one was calm and posed for a while and then decided he’d had enough and disappeared into their nest as well.  Around the hole there were several pieces of moulted python skin.  We walked back by a slightly different route through the blazing sun and were rewarded by seeing a beautiful hoopoe, one of my favourite birds.  There were also some locals who added much colour to scene. 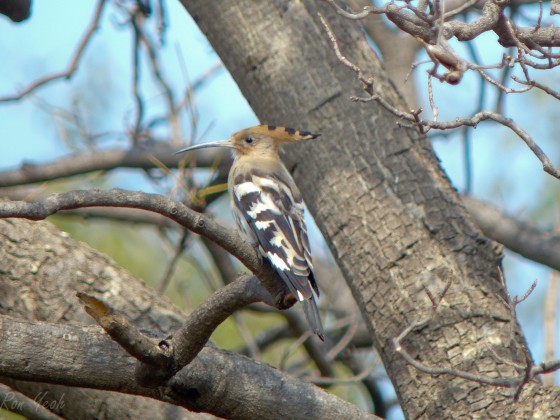 A quick lunch at the canteen of vegetarian sandwiches and water and we were recharged to resume the afternoon session.  We basically then took a slow walk/ride back down the main arterial track and stopped to shoot whatever caught our fancy….these included the Blue throat, red start, yellow bittern and black bittern and a few other interesting things… 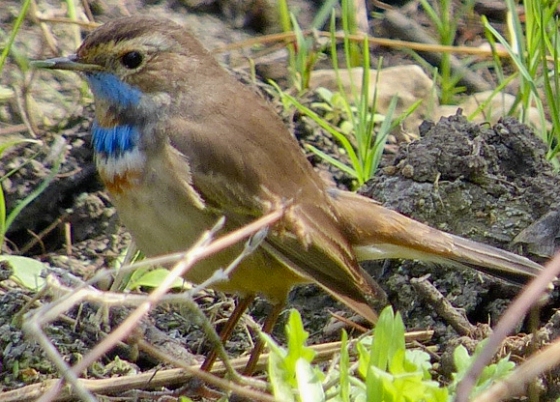 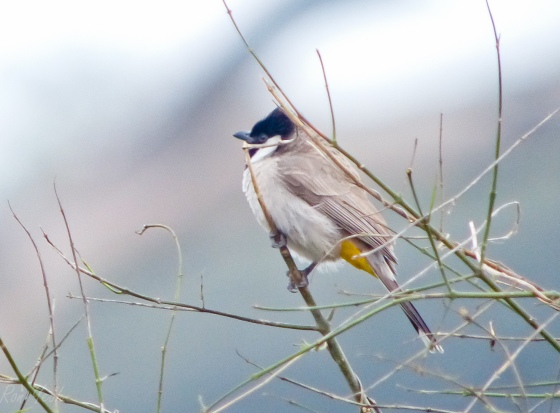 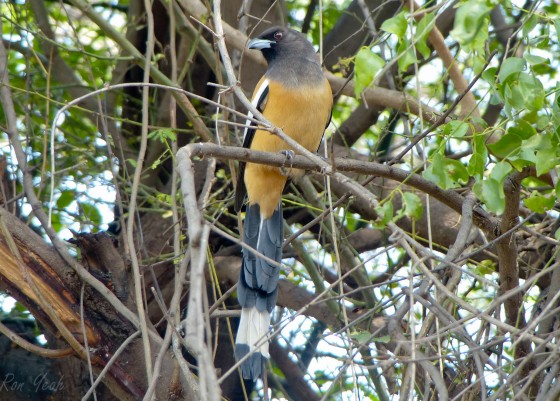 There were other fauna too…this spectacular flat shelled tortoise was sunning himself near the ducks and our day was finally done when we observed the golden jackals near the entrance. 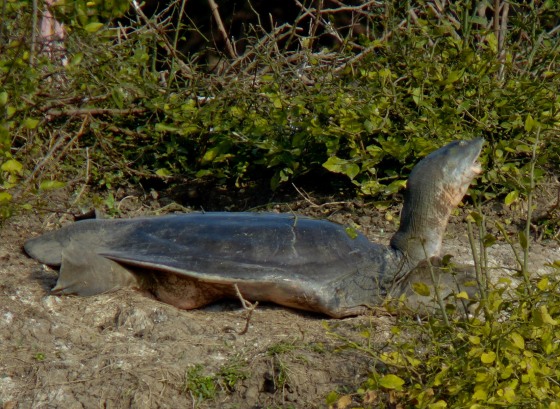 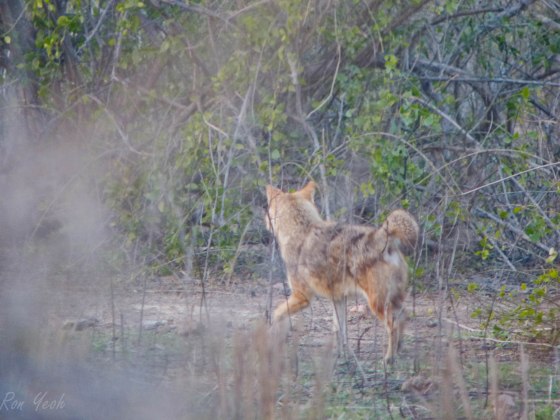 This was an outstanding day’s birding and just enjoying the wonders of nature and I would highly recommend either staying outside the park where there are a few local hotels or take a whole day trip like this. We departed at 630pm as it was getting dark…

Leave a Reply to The Natural Traveller Cancel reply